It’s generally considered a fairly miserable event when the clocks go back at the end of October. It’s the start of a period that can often mean leaving for work in the dark and returning home to the same.  This tends to coincide with a further deterioration in the weather which seems to steal any warmth that remained from the sun.  Growing up, I also associated it with the end of football matches after school, until at least the end of February, which was a bitter pill to swallow (there weren’t floodlit all weather pitches in schools in those days)!

The last couple of weeks, however, I have been reminded to look at things a different way.  How about we flip the negative words we use around this time of year and consider the darkness in the way that a 4-year-old might – ‘magical’, ‘exciting’, ‘mysterious’ and maybe even a bit ‘scary’.  Greg Bottrill talks about ‘Adventure Island’ being a ‘world of story and dream’ and the last week or two has encouraged me to think about how amazing the possibilities are when capturing the imagination of a young child.  In my article ‘Spinning A Yarn’, I recommend that as adults, we try to fully engage our children in the world of storytelling, in an effort to set them up for a life full of incredible tales.  I suggested a walk in the woods could be a great starting point for storytelling, but even your own street becomes a magical place after dark.  If you consider it was probably early February since it was dark at 5pm, that’s a very long time ago in the life of a child in the Early Years.  The novelty is not lost on them (especially as you can pretend it is later than it actually is!).

In ‘The Tiger Who Came to Tea’ there seems something magical about the family stepping out to go for a meal in the café on the High Street, as there is no more food in the house.  It is a particularly amazing experience for Sophie because it is dark: ‘all the street-lights were lit, and all the cars had their lights on’.  It is my birthday at the end of October and that means a curry is on the cards.  Ten years ago, this curry may have taken place at 11pm on the way home from the pub, but these days I settle for a 5.30pm booking so we’re all home for ‘bedtime’.  My 4-year old was in heaven this time around.  He was thrilled to grab his torch and get his coat on for the outing.  He shone his torch, gasped at the stars and moon, and ran and ran and ran.

Since then we’ve been out for spooky Halloween walks and built our own kitchen-roll telescope to see the full moon.  Both have fully captured his imagination and fuelled many conversations.  To have an activity after an evening meal like this can be a very rewarding experience.  If you are working in an Early Years setting, maybe you could suggest that your families seize the opportunity to banish the doom and gloom and embrace the darkness! 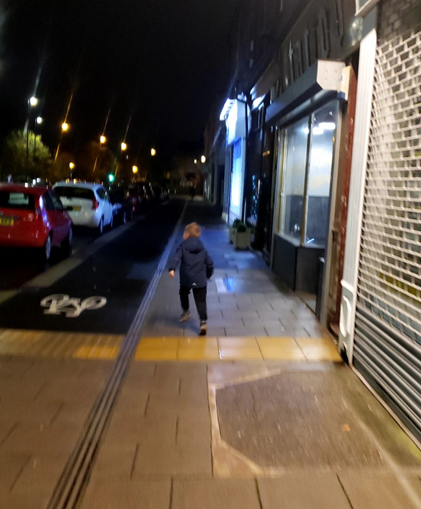