by Juliet Mickelburgh in Articles Teaching and Learning on February 11, 2020

The FSF and Tapestry Education Team are all trained teachers and we like to keep our skills sharp and our knowledge up to date so that we can give the best advice to support Tapestry users and FSF members. For this reason, we occasionally visit schools and nurseries. I was very lucky to be invited to visit Blue Door Nursery, a day care setting for babies (Kittens), toddlers (Cubs) and pre-school (Lions), owned by FSF Rebecca. I was keen to spend some time with the children there, getting a feel for what it is like to be a small person at the nursery, as well as chatting to some of the staff.

Rebecca began by reminding me of the story behind Blue Door. She had been teaching in primary schools for 15 years, and was on route to headships, but as she said, ‘I’ve always had an entrepreneurial spirit.’ And so began the search for a suitable location for a nursery.  The church hall Rebecca found already had a nursery running in it, much loved by staff but ready for a new approach. After writing an action plan and putting her business proposal to the Church committee and the local Diocese, the building and the nursery eventually belonged to Rebecca and her family.

Why ‘Blue Door’? Rebecca says, ‘I wanted something visual, so people would know they were in the right place, and there was something about ‘Blue Door’ that reflected my personality!’ And yes, the original church hall door is actually painted blue! One little boy pointed to the logo on my visitor’s lanyard and said, ‘that’s the blue door of the nursery!’ He clearly knew where he was!

Rebecca gave birth to her second child within eighteen months of opening Blue Door. She has memories of her son being at nursery with her from a very tiny baby all the way through pre-school. She used her own experiences as a working parent to shape the way things are done at Blue Door. For example, pricing is all inclusive, there are no hidden extras. Parents know their baby can arrive in PJs, no need to struggle with clothes if it has been a challenging morning! The space itself is influenced by the way Rebecca’s son moved around it as a baby and small child. It is light and open plan, while still having spaces within spaces, little gates that can be open or closed, ways to see what everyone is doing, or not, as the mood takes you, whether you are an adult or a child!

When I arrived, those Cubs who were moving up to the next age group had joined the Lions for their morning snack. The children were pouring their own water, negotiating over cups and jugs. There was a lot of self-sufficiency going on! 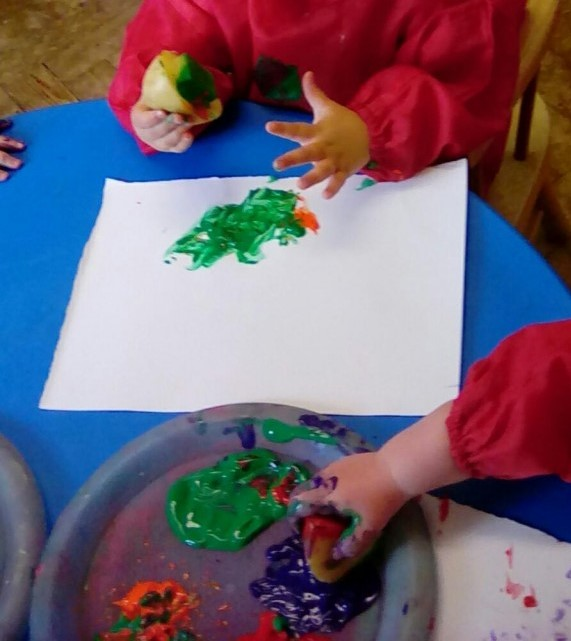 I began in the baby space. They were about to do some painting with chunks of fruit and Victoria, a Junior Manager at the setting, explained the learning journey so far. Some of the babies have been interested in eating and in mixing things, while one baby has been less keen to eat altogether. With this in mind, earlier in the morning they had been outside with lots of cut up fruit – apples, oranges, cucumbers. The babies embarked on some exploratory play, squeezing, sliding, biting and tasting the fruit. By the time I joined them, part two of the activity had moved inside to a low tuff spot. Victoria explained that some of the babies were pulling themselves up and doing the activity at this level allowed them to sit and pull up around the low surface. In the tuff spot were fruit and paint and four babies were ready to explore! As we watched, Victoria was noticing their different approaches: one was busy eating the apple, another was using the cucumber to spread the paint around the tray, one moved immediately to painting his face with his hands, while another watched and eventually followed suit.

The babies communicated their interest and excitement with their whole bodies. Victoria brought out mirrors to show the face painters how they looked – cucumbers were now being used to get the paint all over the cheeks! Then it was time for a wash. While the one almost completely covered in paint had a shower, the clean-up was becoming so much fun for everyone else that it was taken outside, more water added, and everyone ended up sitting in a big tray of water for a splash. 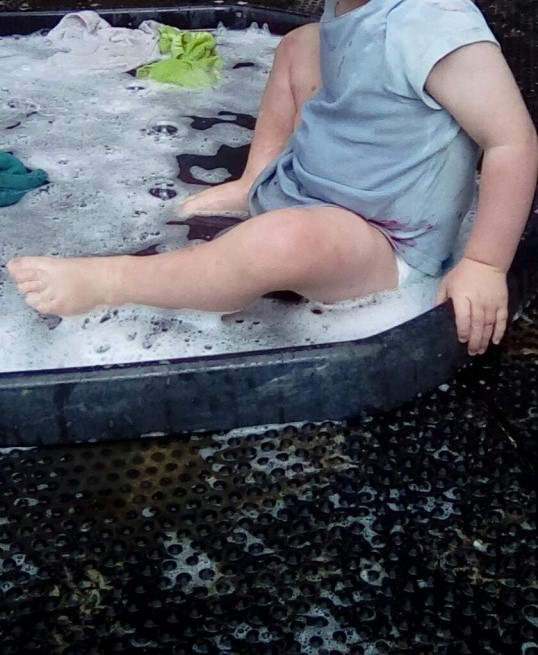 What I noticed was how responsive the educators were to the babies and the interests they were showing. ‘In the moment planning’ was happening, with the addition of mirrors to see their painted faces and even in the washing at the end, learning opportunities were explored and supported.

Victoria showed me how the planning happens in the day. A big wipe-clean sheet on the wall is used to record the journey in a sort of flow chart or pathway of the activities, what came before and space and flexibility to add what is coming next according to what the children are showing you. This system is used throughout the nursery. The staff focus on planning a mix of new experiences or new skills for children.

With some red paint on my nose and jumper as proof of the fun I’d had and the learning I’d done, I headed off through a little gate to where some Cubs were busy making their own playdough. Cassie, who is a level 2 nursery assistant, explained that all the children in the nursery were learning to make playdough themselves.  She was learning with a small group of children and she told me that one of them was just transitioning into being a Cub. He stood snuggled in between her arms while he poured flour and water into a bowl. Two other children had already made their dough and they were squishing, pressing, pulling and rolling it.

‘I made mine red. Yours is green.’

Cassie observed them, listening carefully to what they were saying, while continuing to support the transitioning Cub, quietly putting into words what he was doing. I could see how she was both modelling the actions and giving him the vocabulary to talk about the experience. 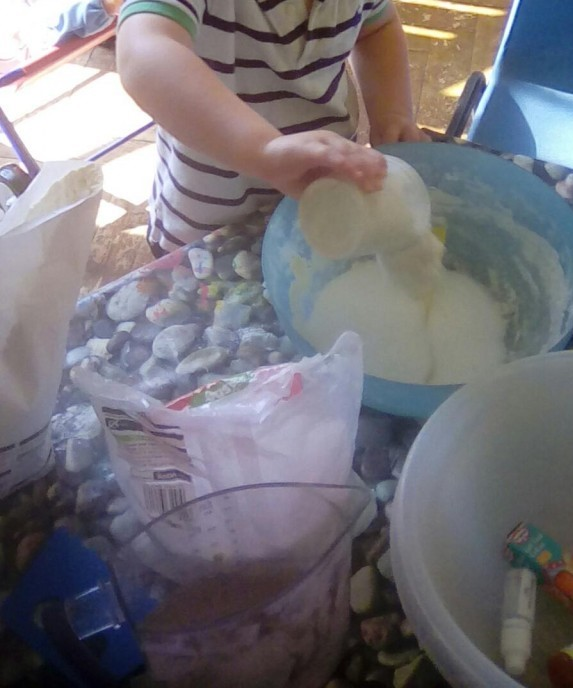 Through another little gate and I joined some Lions who were also making their own dough. The difference in provision of this activity for the older children was clear. Each had their own bowl and they were adding their ingredients with guidance from Maggie who is qualified at level 3. The energy at this table was part George’s Marvellous Medicine and part ‘Potions’ lesson in Harry Potter! Flour was wafting up in puffs and water was making puddles and in each bowl some dough was magically forming! The children added colour and smells. Maggie told me the motivation and journey behind this activity – the children had been collecting natural loose parts in the garden the day before and had been sticking them in things outside. This morning they were learning the skill of making their own dough, and that afternoon they would gather the loose parts they had collected and explore them with the dough. Maggie discussed the process with them as they added ingredients and mixed with spoons or hands.

‘I made it a bit sticky. I need more…water!’

I had now added flour and water to my red paint splodges, and I was ready to catch up with Jane, Manager and Team Leader for Under Threes at Blue Door. Jane was at the Nursery before Rebecca became the owner, and we talked about change. She explained that there were lots of changes, to the building itself and to the practice, and this kind of change can be difficult for everyone. But she said that change was adopted as a team effort and taken slowly. Jane also talked about the change in her own role when she became a Manager. She explained that, like many staff who change roles, she wondered whether she would still be able to stay in touch with all the things she had always done and loved doing. What she has found is that one role has enriched the other. She feels she understands what it is like to be a member of staff, and she has a detailed knowledge of early years which she brings to her job as Manager and this helps her to understand the team and how to support them.

Jane also spoke about the community served by Blue Door and the importance of meeting the requirements of that community. It is a good business model to adapt and be flexible, listening to what parents and carers need. Each setting is unique. Jane pointed out that even two settings in the same town will not be the same as each other.

My time was nearly up, and I found Rebecca again. We finished by talking about training new staff. Rebecca is very clear that Blue Door is a place where everyone is learning, and that includes the staff. When someone new to early years and child development joins them, Rebecca takes time to sit with them, Development Matters open in front of them, while together they observe children playing. She gave a recent example when she and Amy, who is beginning her Level 2, watched a little person aged 22 months having a go at feeding himself with a spoon and fork. On the journey from bowl to mouth he would turn the spoon over so all the food fell off. She discussed with Amy the activities that could be offered to help him learn to keep his hand and the object on the same plane – carrying cups of water during water play outside, walking with a bean bag in a scoop. They discussed the language that can be added to this play – ‘keep it up’, ‘look it’s straight’, ‘tip’. They also thought about how to support him to use the fork to skewer his food – sticks in the sand, tools in playdough, again accompanying this with language – ‘jab’, ‘stick it in’. All the language as well as the physical practice, then becomes the supportive trigger to help him when he is back at his lunch again!

I left Blue Door having gained some smudges of red paint and a dusting of flour, but also having seen good practice first-hand, planning that moves with the children, and of course having had some most excellent conversations with small people!

After doing her PGCE, more years ago than she’d care to mention, Juliet taught in Nursery, Reception and Year 1 classes in South London and East Sussex. She has also worked as a Learning Mentor. She was originally a freelance writer for the FSF and had a children’s picture book published. Juliet is now officially employed by the FSF and Tapestry, working in product support and as an Education Advisor. Along the way she has accumulated a husband, some children and way too many pets!