Followers 1
To Decolonise or Diversify? Is that the question?

by Adam Vasco in Articles Teaching and Learning on February 9, 2022

Are you sitting comfortably? Depending on your age those words either take you back to ‘Listen with Mother’ or more recently, cBeebies. I make no apology for the fact that should you choose to read on, it is highly likely that your comfort will turn to discomfort. I have come to terms with this now, none of us are immune, we are all on a learning journey. For too long we have been comfortable in society and in the education sector regarding matters of race. For too long the status quo has remained. After all we are good people, we care about children, we are certainly not racists, and we want to improve lives. We are the good ones… aren’t we? However, as Nova Reid writes in her 2021 book ‘The Good Ally’:

‘Society has become really good at dehumanising: ‘racists’...  racism has got nothing to do with being a good or bad person. It means facing up to the fact that what we’ve been taught to believe about ‘racists’ – being exclusively abhorrent, probably unintelligent and definitely violent individuals – is false.’

In summary, people who want to intentionally cause harm are in the minority. Well intentioned, kind-hearted, well-meaning people are in the powerful majority. People like you. Right from the outset it is important that I make it clear that it is my belief that if we are committed to positive action and change, then we must become accustomed to being comfortable with being uncomfortable. So, are you sitting uncomfortably? Then I’ll begin.

Since the 2015 ‘Rhodes Must Fall’ campaign there has been a growing Decolonisation of the Curriculum (DTC) movement. The caught-on camera murder of George Floyd in the US sparked mass support into an already growing Black Lives Matter movement and opened people’s eyes to the racial inequalities that are entrenched in Western society. As is all too familiar, there was a British exceptionalism viewpoint, watching on in horror at our cousins over the pond struggling with systemic racism. I say exceptionalism as only a matter of weeks ago in December 2021, West Mercia Police Force issued an apology, yes, an apology, for killing former footballer and Black man Dalian Atkinson after tasering him and kicking him in the head at the time of his arrest outside his father’s home when suffering a mental breakdown. The officer in question, found guilty of the unlawful killing, is currently serving a jail sentence for manslaughter. The killing took place in 2016, the apology offered in 2021. ‘I can’t breathe.’ Systemic and structural racism is entrenched in British society. The kind of systemic racism and inequality that results in it taking 19 years to convict Stephen Lawrence’s murderers. The kind of systemic racism that means you are 40 times more likely to be stopped and searched by the police as a Black or Brown person (Townsend, 2019). The kind of systemic racism that means you are four to five times more likely to die in childbirth as a Black or Brown mother (Summers, 2021). The kind of systemic racism that means sending 80-90 per cent more job applications to get a positive response from an employer because of your ethnic background (Siddique, 2019). Race is a social construct, it is not real, but the impact of racism is very real. Education, and in particular early childhood education has a crucial role to play in addressing this inequality, but in order to make a change, we must also change, we have to be open to learning and here is where the journeys starts.

Let’s deal with the elephant in the room. We are all, regardless of ethnicity and heritage, a product of a colonial past. As a result of this we all harbour both conscious and unconscious biases. On my own learning journey, I have come face to face with the uncomfortable truth that as someone of dual heritage, I harbour anti-blackness. As upsetting as this was to become aware of (I’ve always been and remain immensely proud of my Nigerian ancestry) it is perhaps not exactly surprising when looking back at history. From the enslavement and sale of human cattle to the colour coding caste system, it has always been a consistent message - white good, Black bad. It is innate. It is embedded in our everyday lives, when we consider: what is beautiful, whom to fear and who to trust, even in our language; ‘blacklist, blackmail, black market’, to name but a few. In fact, research from Houghton and Houghton (2018), found that this kind of terminology not only reflects racist attitudes but also serves to reinforce and perpetuate them. Their study demonstrated the word ‘Whiteness’ has 134 synonyms, 44 of which are favourable and only 10 appear to have mild negative implications. However, the word ‘Blackness’ has 120 synonyms, 60 of which are negative, and none are positive.

None of us are immune from this. Not even young children. In 1940’s America, during a time of segregation and the Civil Rights movement, Kenneth and Mammi Clarke developed a psychological test, now referred to as the ‘Doll Test’. They found that given a choice between Black dolls and white dolls, most Black children had a bias towards the white doll. They associated positive characteristics to the white dolls but negative characteristics to the Black ones. In the final question, children are asked to identify which doll most looks like them. Having watched this play out thousands of times, like in the link in the reference list, I still find it impossible to not become upset. The learning from this? We are all a product of colonisation. None of us are immune.

‘Whiteness positions itself as the norm, it refuses to recognise itself for what it is, it’s so-called objectivity and reason is its most potent and insidious tool for maintaining power… it is a problem as we consider humanity through the prism of whiteness’. Eddo-Lodge, 2019

It is likely most of us have a single-story narrative in many aspects of our lives. We may have now finally said our last ‘Happy New Year’ greetings and our thoughts have likely turned to losing the excess Christmas pounds (maybe that’s just me) but the festive period still brings about a blatant example of our colonial past. How about the first record I ever bought, the one that is still played on our air waves year after year - Band Aid. Where we all sing along on our Christmas nights out, asking if ‘they’ (important word to remember) know it’s Christmas? That’s the continent of Africa, home to 54 countries, a population of 1.3 billion and 700 million Christians being asked if they know about the birth of Christ. Keeping with a chart theme, the top 10 Christian countries, as in largest number of Christians has three African countries in it, one of which being Ethiopia, the country whose famine made Bob and Midge recruit the pop stars of the time, so yes, I am going to stick my neck out and confirm ‘THEY’ know it’s Christmas. I could go on and unpick the whole song, ‘where nothing ever grows’, except tea, coffee, cocoa, countless fruits and vegetables we export constantly, but you see my point. It would be foolish to think that the damage that images and words from this song and the Western aid industry have done to stigmatise an entire continent are not felt today. When I say Africa, what is the first image that springs to mind? Decolonise or diversify? Shall we start with doing that on our radio waves?

Or what about the national treasure that is the antiques roadshow, as Dan Hicks pointed out in his Tweet here: 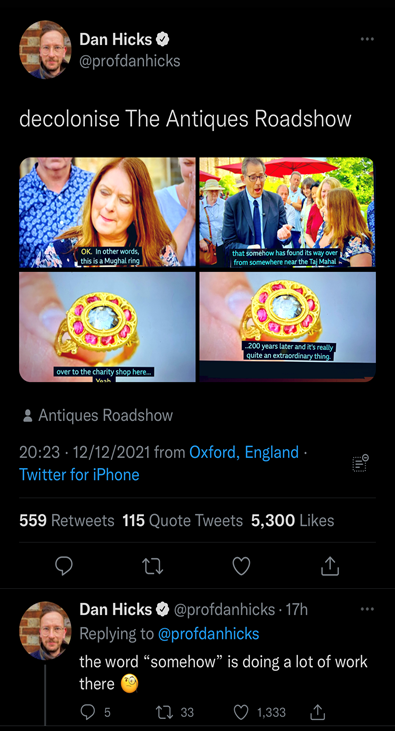 This ring ‘somehow found its way to the charity shop’. A bit like the tens of thousands of items sat in our museums found their way there? Aka stolen from Benin for example after a violent invasion. So, decolonise or diversify? Shall we start with our TV programmes?

The wonderful writer Chimamanda Ngozi Adichie (2009) describes the effects that labels can have on how we think about ourselves and others in her Ted Talk entitled ‘The Danger of The Single Story’.

To decolonise or diversify? First, we need to learn and unlearn.

‘Usualising diversity has significant power in relation to all forms of diversity issues. For example, teachers need not create ‘shrines to people’ in the corners of their classrooms but rather to ensure all people are represented alongside others; integrated; ever-present. The same applies to the Black Scientists posters… This attempt at promoting diversity can actually just reinforce the othering effect. Diversity isn’t something you stick a label on and make room for on special occasions: here comes a dose of diversity…. now, back to normal. No. Instead, you usualise it. It’s always there, woven into the fabric. In so-doing, we educate children about people who are different to them; we tackle ignorance, break down barriers and prejudices. The gallery of ordinary people, families, characters, rulers, authors, scientists, politicians, heroes and villains, artists and professors that children encounter consists of a diverse array of people representing different ethnicities, genders, LGBTQ identities. Embedded, everyday, usual.’  Kara (2020)

This is a process, and the first part of that process is acknowledging that we are likely going to need to unlearn some of what we thought we knew. It begins with a journey of self-education. We would not enter our settings ready to facilitate learning and play opportunities about early language, number or indeed any area without knowing about it ourselves. Decolonising and diversifying is no different. It is not a question of which, it is a question of being open to learn. Thankfully there is help at hand. I am proud to be part of a working group for MixEd who are looking at how we can support both the decolonisation and diversification of the curriculum movements at a practical level. The aim is working towards ‘usualisation’. We have developed a free resource to help navigate the journey.  There are a wealth of excellent texts which help us come face to face with our own implicit biases, however in my opinion and that of my MixEd colleagues, there is no better place to start than Nova Reid’s ‘The Good Ally’, more essential than recommended in my opinion.  When it comes to making practical change support comes from Dr Pragya Agarwal and her book ‘Wish We Knew What to Say; a toolkit for talking to young children about race’ and Bennie Kara’s ‘A Little Guide for Teachers: Diversity in Schools’. 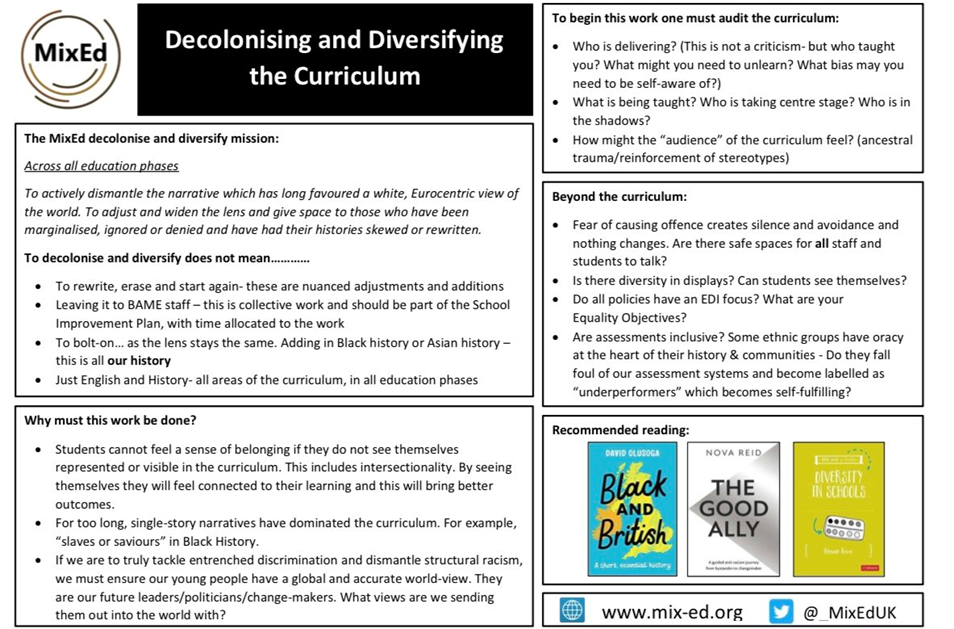 To be part of the change we must move beyond performative allyship. We have all been accustomed to seeing the world through the prism of whiteness (Eddo-Lodge, 2017). To change that will take a commitment that goes further than what has gone before. Dr Martin Luther King said ‘I have almost reached the conclusion that the stumbling block toward freedom is the white moderate… who constantly says “I agree with you in the goal you seek, but I cannot agree with your methods of action”…’

It is time that we take action.

Agarwal, P. (2020). Wish we knew what to say: talking with children about race. London: Dialogue Books.

‌Houghton, F. and Houghton, S. (2018). “Blacklists” and “whitelists”: a salutary warning concerning the prevalence of racist language in discussions of predatory publishing. Journal of the Medical Library Association, 106(4).

Summers, H. (2021). Black women in the UK four times more likely to die in pregnancy or childbirth. [online] the Guardian. Available at: https://www.theguardian.com/global-development/2021/jan/15/black-women-in-the-uk-four-times-more-likely-to-die-in-pregnancy-or-childbirth.

Adam Vasco leads the 3-7 Early Years Post Graduate Route at Liverpool John Moores University. He spent his early career in the PVI sector, returning to University and qualifying as an Early Years teacher in 2004. Over the next 15 years he worked from Reception to Year 6, including being a Deputy Head. He then moved into Higher Education and Initial Teacher Education.
Followers 1