Followers 0
What happens to students once they fall down the secondary school rabbit hole?

by Alice Hagger in Articles Primary on August 4, 2020

For Year 6s, the journey down the rabbit hole used to be relatively straight forward. They’d relax for a while on the comfortable primary school bank, the magical promise of ‘Year 7’ would catch their eye, and after feeling dizzy from the whirlwind of the SATs, eventually they’d arrive at secondary school with a thump - the excited, light-headed kind!

Usually, at this time of year, secondary school teachers and leaders have been inundated with information that allows us to shape our understanding of the new arrivals. SATs scores have been released, ‘get to know me’ transition booklets have been passed on from feeder primaries and, for the luckiest ones, some Year 6s have already met their new tutors and teachers and spent the day together.

I know in my own setting, I relished the ongoing discussions with feeder schools, looked forward to receiving their summer homework and could confidently ensure our opening week of English lessons were pitched perfectly thanks to a mixture of SATs results and a summer baseline test. In fact, year after year, our transition curriculum was only getting stronger and the proof was truly in the smiles on our Year 7s’ faces. However, what fun would a journey be without an obstacle or two? This year, the alarming obstacle arrived in the form of COVID-19.

A flashback to September 2019 would take you to a time when all was well. Our new pupils would join us and, after asking “Can I decorate my book?” or “Are you sure I can write in pen?”, they would begin their life as a real Year 7. They would then delve straight into the fantastical world of Myths and Legends or attempt to defy typical conventions of fairy tales and create a ‘Practical Princess’ tale of their own. However, as much as we relished the satirical voices they were developing (and we were not sure if it was thanks to our English lessons or the sass that comes with secondary school), we felt that something was missing.

The writing skills being showcased in these opening units were exactly what we wanted to cover: ambitious vocabulary, synonyms and antonyms, varied sentence starters and types, and accurate punctuation. Yet one thing we were noticing was that the length of these writing pieces was short, very short. I soon realised that we were actually only halfway there with our transition unit - the skill focus was correct - we just needed a way of slowing it down and allowing the students to really showcase themselves at their best - the way they would have in KS2.

For some, alarm bells might be ringing as it could appear like a step backwards, or ‘dumbing down’ the learning. I can assure you it was not; it was more like pushing them out of their comfort zone while keeping one foot firmly in it. Then, as if by magic, our transition unit ‘The Lost Land’ (version 1) was born.

Our Lost Land transition unit was centred around the idea of students creating their own ‘lost land’, allowing their imaginations to run free, and bringing this to life with a series of pieces of writing. Each week would have a different skill focus, writing style and famous examples to steal from. In week 1, the students could be focusing on colour imagery and describing a setting, and in week 4 they might be using their imperatives and time adverbs to instruct someone on how to slay the dragon! This all culminated in the students choosing their favourite 4 pieces, redrafting them until they were happy, and presenting them in a typical primary school style. *The style that all parents dread that involves anything from paint and paper mache, to liquid latex and red nail varnish!

Eager to ensure that my department was doing everything we could to make the transition as smooth as possible, and also very aware that I did not have all the answers, I reached out to a group of people who I can always rely on - Tweachers - aka, teachers on Twitter. 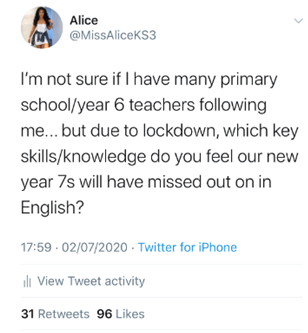 The response was overwhelming, and I was inundated with a range of feedback from teachers across the UK. Of course, the tricky thing with transition, and the even trickier thing with this period of home learning, is that we are less sure than ever what the learning gaps will be. Some teachers replied with very specific skills such as sentence structure, grammar and literature analysis, others felt the gaps would be more holistic such as stamina, and a few of the lucky ones were convinced that there would be no lost knowledge or skill at all.

Beyond the responses themselves, the analytics of this tweet told me just how important the need to delve deeper had been. With over 40,000 impressions, 6,000 total engagements and nearly 4,000 people expanding the tweet to see the replies for themselves, I had clearly unlocked a secret room. (To unlock the secret room yourself, click here.)

This feedback allowed me to take a step back from our original transition unit and examine it with a fresh pair of primary-informed eyes. As our school typically teaches English in ability based sets, the lack of SATs or baseline has meant that we are going into September with mixed ability grouping and then organising our baseline and learning groups two weeks later. Now, of course this is less than ideal, and therefore, was the first thing I needed to attack.

With the idea of pupils potentially experiencing upheaval two weeks into their secondary school experience, it was important for me and my team to do whatever we could to support them from the classroom, and from this we produced ‘The Lost Land’ (version 2!). We immediately decided to slow down our unit even further, and rather than each week being based on a different form of writing, we would spend the very first two weeks just on one. To support this even further, and to ensure that all students were getting the same scaffolding and support regardless of class, we designed a booklet which they would eventually take to their ‘real’ English teacher. In doing so, we are also hoping to replace the ‘Here’s my best work, Miss!’ folder experience that was stolen from them at the end of term. 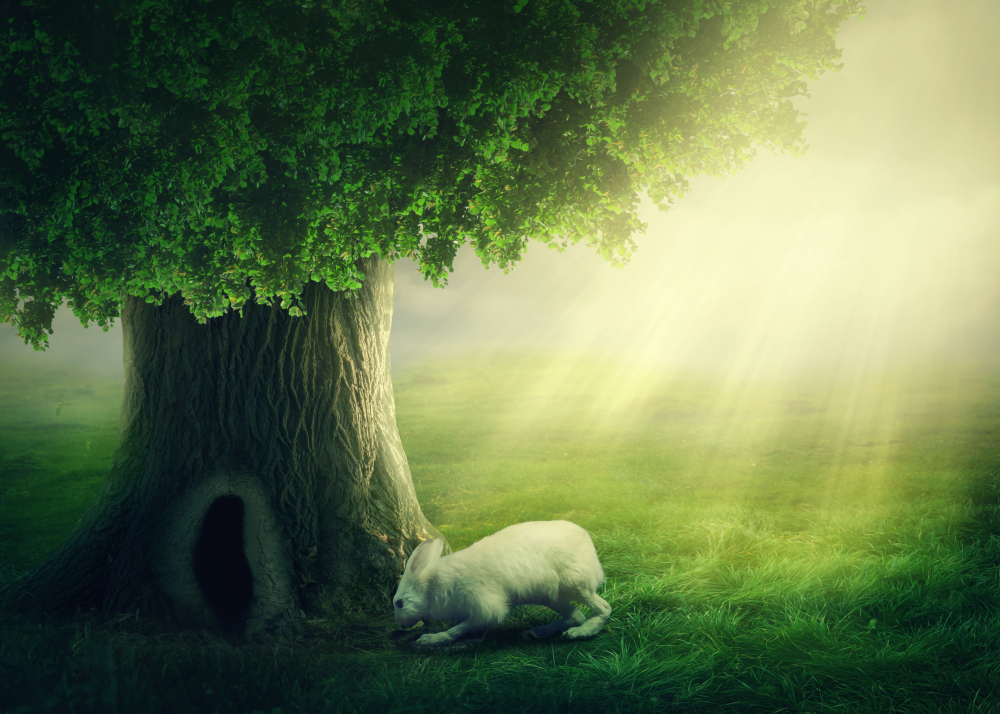 That’s transition sorted then, right? Not quite. What about the transition from overindulging all Christmas to having to be alert and disciplined in January? Or the transition from being a ‘newbie’ Year 7 to preparing for your end of year test that determines your Year 8 set? Of course, transition typically refers to the short period of time, perhaps covering June - December, where Year 6s are handed the little golden key to the stomping ground of secondary school. But it’s important to note that the 2020/2021 cohort are like no other. These children are not only transitioning from primary school, they are also transitioning from home learning, from lack of closure, from loss of routines, and some, from grief.

Transition has had an upgrade and now needs to span further than the typical 6 or so weeks given to it at the start of an academic year. With the feedback from my online peers still in my mind, I wanted to find a way that once they progressed through the Year 7 journey of Fairy Tales, Poetry , The Unheard Voices of Shakespeare and Bad Girls of History, that time was still dedicated to building their stamina, particularly in the units that are heavily weighted in the pool of analysis. To combat this we are introducing a fortnightly ‘big write’, with minimal rules, completely unrelated to the curriculum topic, but simply a time for them to be free and practise the art of drafting and redrafting.

As an Accelerated Reader school, we also want to ensure that we do everything we can to keep the reading momentum going. The dip in reading and the stagnation of reading age has been widely reported on, with the most recent 2020 Renaissance What The Kids Are Reading publication reporting that from Year 6 to Year 7 the average number of books read dropped by 12 per year, and then as they enter year 8 it drops by another 5. Unfortunately, with the uncertainty around how schools will be able to use their libraries and the sharing of books, this isn’t a straightforward task either. However, until we have more clarity on this, we are still making steps to keep the reading stamina and love alive. Alongside our fortnightly English lesson that is solely dedicated to reading, we are implementing a tutor time reading programme, further spurred on by the research that found “reading two challenging novels over 12 weeks helps weaker pupils make 16 months' progress”. We are also attacking our novel units differently - preloading with 2 to 3 weeks of pure reading and discussion, and then going back to explore the key themes and characters chapter by chapter.

Of course, this plan isn’t final, and we can’t promise to have all the answers, but we can promise to make the journey down the Secondary school rabbit hole as pain-free as possible!

Alice joined an inner London girls’ secondary school five years ago and has been there ever since! As KS3 lead for the English Department, she is passionate about Teaching and Learning strategies and developing a rigorous, diverse curriculum.
Followers 0