As an ex-year six teacher, I can’t help but feel heavy of heart at this time of year. The latter half of the summer term were some of my favourite times as a teacher and that is due, in large part, to transition.

This is a historic year for our year 6s, who will be moving on to secondary school in September without experiencing a “proper” transition. T-shirt signing, class assemblies, celebration assemblies, school trips, residentials, picnics, BBQs, open days, secondary school visits – all these traditional activities to help with transition were all either cancelled or modified this year.

Transition at any point is an incredibly important part of any child’s school life. It provides closure for the previous year, as well as helping to prepare them for the next step in their education. But it isn’t just the children who are affected. Their parents, their communities, the year 6 teachers, the year 7 teachers, are all feeling the effect.

Conversations I have had with secondary schools implied it was a difficult situation for all. The teachers and staff struggled with not meeting children face to face. The yearly “handover” meeting with year 6 teachers was done online which, while a good alternative, comes with its own drawbacks. Secondary schools are faced with a very different September than they are used to.

It’s difficult to gauge the impact this will have on children because this is the first time this has happened. It’s easy to think the children don’t know what they’re missing. But many have siblings who have had the opportunity to do these activities in the past, and they will have observed previous year groups celebrate their moving on,  and no doubt some kids will be feeling hard done by.

So, what are schools doing to mark what will be an extraordinary year, and to help aid transition for our year 6s?

Speaking to my former year group partner, the answer is… as much as possible. We spoke about how strange this will be for the children, teachers, and parents alike. Moving from “little school to big school” can be an emotional journey for parents, too. And transition is as much for them as anyone else.

Celebrating the time they spent together is a crucial part of moving on and preparing. So how do you foster togetherness in a world urging distance?

Luckily, restrictions are beginning to lift so schools are in a better position to plan things than they were two months ago. We always used to host an end of year gathering for our year 6s. All parents and adults were invited, we would cook a BBQ and play games on the field. Teachers from other year groups would even come and say goodbye and steal a burger from the grill. So, I was thrilled to learn this would still be going ahead on the children’s last day. Of course, they would be adhering to current social distancing guidelines. Contact games wouldn’t be going ahead and the BBQ is replaced with a “bring your own picnic”. But the event still prevails!

Brighton and Hove have organised a city-wide day in September for all year 7 children to return to primary school. Hopefully at this point we will be in a much safer position so that day will be a chance to do the things we couldn’t do this summer. My previous school plan on doing their annual BBQ on this day as well as gathering the pictures and video footage that go on the end of year DVD, a traditional parting gift from the staff and a treasured keepsake for the families. The phrase “better late than never” seems to really apply during this time and I think it’s really important to not let these gestures slip past us.

The other thing we used to do at the end of term, which I’m sure a lot of you are familiar with, is the end-of-year show. Now, considering a fraction of the children are in school at any given time, this has been impossible.  Some things just can’t be modified to work in this situation and it’s easy to get hung up on that. But I have heard and seen so many wonderful things that schools and communities are doing this year. It really pays testament to everyone’s ability to be flexible and caring. 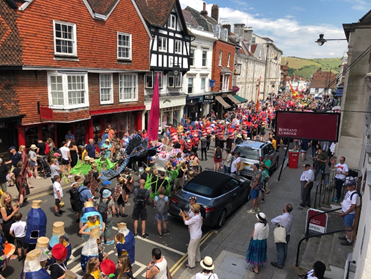 Transition isn’t confined to just schools. In lots of places, this time of year is a community effort. In Lewes, where Tapestry and FSF HQ is based, they have had an annual arts project called Patina (Parents and Teachers in the Arts) for the last 18 years, which culminates in a children’s parade around town.

In the weeks prior to this, local artists go into schools and work with children on decorating costumes and floats based on a yearly theme for the parade. It’s been a rite of passage for generations of local year 6 children, their town celebrating them and wishing them well for the next stage of their lives. Sadly, a lot of this had to be changed this year. No visiting artists in schools and no parade, but the community still showed great spirit and rallied together to give the children what they deserve.

They made well wishing videos and organised toilet-roll-tube-based art activities the children could do from home. Another great example of our ability to adapt during this time.

I have found it so easy to get caught up in all the things we can’t do at the moment. But energy is better spent on the things we can do! You don’t need to start from scratch here. Take what you have always done and adapt it. Or look at this time as a good opportunity for change. You might come up with something this year that you will end up doing for the rest of your career.

Jack is part of the Product Support Team and the Education Team at Tapestry. He taught in Key Stage 2 for four years but now spends most of his time stroking his beard and thinking about how to make his articles funnier.