by Rachna Joshi in Articles Personal, Social and Emotional Development on February 10, 2021

I originally wrote a similar piece which looked at health and well-being from a Froebelian point of view and compared this with McMillan and contemporary practice. However, investigating some global educational philosophy has helped expand my understanding of this discussion. One of the reasons I decided to deviate slightly from my original writing was after hearing a podcast by Dr Muna Abdi with Liz Pemberton and Jamel Carly, who pointed out that the philosophers who are constantly discussed are white, and any ‘other’ standpoints are not easily available, or heard of!

I chose to include South Asian and East Asian philosophy within the discussion of Health and Well-being due to the proximity to my own cultural understanding of these values. I have found that there are many similarities in practice that may have been established a lot earlier perhaps due to the nature of the philosophy and cultures, as well as the spread of this through colonialism.

We need to maintain a critical lens when discussing educational philosophy that grounds our current practice. By bringing a variety of global philosophies into the discussion, we begin to think critically about where our pedagogy comes from and the links that the pioneers we study may have made.

A simplistic definition of the Vedas would be that they are texts from India which influence Hindu philosophy, culture, and religion. There is much more depth and detail in the Vedas with different components and writings that make up the teachings and beliefs in Hinduism. These teachings influence what Education looked like in 6th Century BC India. Education constituted lectures and lessons on various topics such as Philosophy, Astrology and Logic and these concepts were related to everyday life through domestic and agricultural responsibilities at their teacher’s home.

Vedic education also focussed on moral, physical and intellectual development. This Ancient Indian education system looked at the development of personality and character, the impact of one onto the community through civic duty, application of knowledge into the community, and development of spirit and righteousness. This was mostly explored through ‘learning by doing’ and practical lessons in nature. Vedic philosophy demonstrates an understanding of what it means to be human and students used yoga to explore this. The use of yoga as a philosophy has been explored in more detail with Karisetty et al., (2020) who look at the impact of yoga on physical and mental well-being in individuals.

Confucianism originates from China and was developed from the teachings of Confucius. His beliefs and philosophy focused on personal ethics and morality. Similar to Vedic education, Confucius also understood the idea of education as something to be experienced:

“I hear and I forget. I see and I remember. I do and I understand.”

Hung et al., (2000) discusses how Confucian concepts of morality and personal ethics are applied in education, for example, through the idea of ‘heart-mind’, ‘will’ and ‘desire’. The common core values being the well-being of the individual within the community, and the application of these theories into daily and practical life.

Confucian education values lifelong learning and the development of human beings as fundamental concepts. Confucian philosophy impacted cultures in East Asia and continued to infuse with cultures such as Islamic, Buddhist, Tao and Hindu cultures.

The Vedic and Confucian education philosophies can be applied to the context of health and well-being through the holistic development of each student, the emphasis on what it means to be human, and the impact of this on the world around us. These are core principles when trying to understand the meaning of life. As educators if we focus on these fundamentals, we can look at how we are influential to children as they encounter the world around them.

Froebel’s context was in rural Germany where he spent a lot of time outside as a child and showed interest in nature and outdoors. Philosophical ideas of Rousseau were circulating around the time he - looked particularly at Romanticism with childhood, outdoors, and nature. These ideas can be found in Froebel’s writing:

“Nature, with the world of plants and flowers, so far as I was able to see and understand her, early became an object of observation and reflection to me” (Froebel 1915).

Froebel’s affinity with nature and connectedness came through in his ideas on education, through the kindergarten where he outlined the need for children to have their own individual garden to tend to. The layout and landscaping of the garden was designed so that all were connected and ‘part of the whole’ perhaps symbolising ‘child in family’ or ‘citizen in community’? (Froebel 1899,1912) See image below: 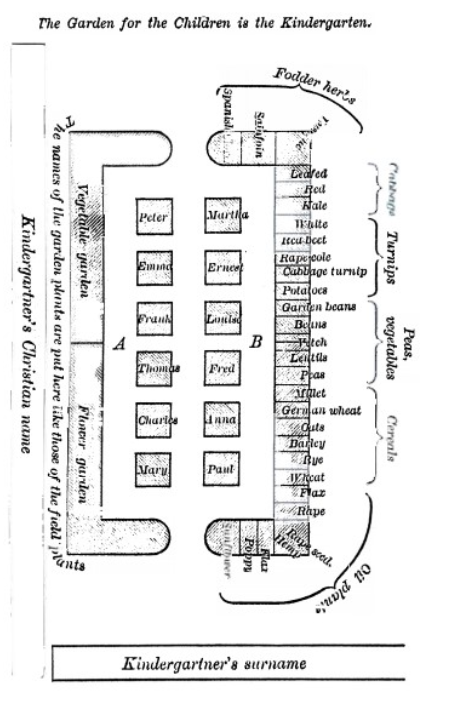 Froebel also emphasised physical health by recognising ‘inner reciprocal active connection of all parts of the body’ and his writings regarding the respect and cultivation of the Spirit may be interpreted as well-being or mental health (Froebel 1885).

Froebel’s philosophy continued to spread into Europe throughout the 1800s. In London and Manchester, in 1850, Froebelian schools were established. The Froebel Society and Froebel Education Institute were all founded towards the end of the 1800s and from these organisations the Froebelian principles were formed. The principles are broad and are the basis to most contemporary practice. Both the Froebel Trust and International Froebel Society have their own version of the principles.

McMillan’s ideas of health and well-being in education seems to have less of a romantic view and more of a medical viewpoint. She maintained the idea that ‘health was the only capital that most men possessed’ (Lascardides & Hinitz, 2000) and therefore her educational philosophy was based on healthcare. McMillan may have noted the impact of pollution in London and her experience between wars on the health of those in society. Another impact she noted was the worsening social divide between poorer and privileged families and children. McMillan was critical of the state of education, and therefore she and her sister Rachel set up the Open Air Nursery School in Deptford (which still exists as Rachel McMillan Nursery School).

McMillan used the outdoors and nature to focus on physical health and well-being. She had witnessed the slums in which children were living and looked to support children and families by teaching skills for self-care. Similarly to Froebel, McMillan also wrote extensively about gardens and the study of nature and linked this to the current scientific discoveries:

“There are motor elements in perception, and there is stimulus in the sight of lovely or strange things. Most things provoke or encourage movement in children or adults” (McMillan 1930).

Now we have touched upon a variety of philosophies, we can consider the impact they have on contemporary practice.

Vedic and Confucian education focused on theoretical concepts which were applied through ‘work’ often in nature. Vedic education also included yoga as a form of reconnecting with oneself and reflecting on the deeper meaning of life. These philosophies show more understanding of why we as educators do what we do and brings us back to focus on the humanness of our roles. We may consider these philosophies to underpin everything we do in life, and how we are supporting children in building their understanding of the world and meaning of life.

Froebel references philosophical meanings and contexts in his writing, with a focus on education and children. His principles have continued in contemporary practice through broad values that practitioners would agree with. Many Froebelian authors write in ways that support practitioners in bringing the Froebelian pedagogy to contemporary practice (Tovey, 2017, Taylor, 2013, Bruce, 2012).

McMillan’s values have permeated into our practice through the importance of outdoors and physical health. In addition, her context may be akin to what our current societal context is – the widening gap between the wealthy and less wealthy and the impacts of covid-19. Building on this point, Reeves (1913) describes the cramped and crowded homes in London: ‘a family of eight persons using three rooms’.  Whilst this is shocking, it can be compared to today’s practice where Knight (2011) writes about the characteristics of living in London – including crowded housing and high levels of child poverty. These housing situations are common to inner city schools and could be a factor as to why the Newham Outdoor Project was commissioned (Early Education, 2017). The EYFS (2017) insists children have access to an outdoor space. How this is used can be up to settings and individuals, with the use of an outdoor space linking to the physical health and well-being of children and perhaps making links to McMillan’s ideas on the outdoor classroom.

Government policies such as The Play Strategy (2008) sets the tone for what is valued in early education and this is then filtered down to practitioners who embed the agenda. However, when these policies are axed, this message is also permeated into the educational landscape. It is then up to individuals, charities or organisations to ensure health and well-being values are not forgotten, and find ways for support to be accessed by all (Department of children, schools and families, 2008, Voce, 2015, Early Education, 2017).

Our values of health and well-being

Connections, relationships, outdoors, nature, food and wellness are all contributors to improved health and well-being. Below are some practical ideas incorporating the philosophies that we have explored:

o   Consider global educational philosophies, ask yourself why you are doing what you are doing and how does it fit with your core values?

o   Use Yoga and Meditation in the classroom

o   Consider Philosophy 4 Children as part of your practice

-          Roehamptons Digital Archive collection of Froebel (and others) writing: http://urweb.roehampton.ac.uk/digital-collection/froebel-archive/

Friedrich Froebel’s Education by Development The Second Part of the Pedagogics of the Kindergarten Translated by Josephine Jarvis London: Edward Arnold, 1899

Taylor, A. (2013) Reconfiguring the Natures of Childhood. Oxon: Routledge.

Rachna Joshi has been teaching in Early Years since 2014 and she has recently completed her MA in Early Childhood Studies at Roehampton University. Rachna is passionate about bringing together theory and practice and is an advocate for the holistic development of the children she works with and their communities.
Followers 3