by Emma Cook in Articles Leadership and Management on January 20, 2020

‘The promise of happiness, or at least the pursuit of it, is the great and charismatic narrative of our country - powerful, frustratingly elusive, dangerously malleable—and therefore worthy of our attention’ (Black and D’Albertis 2011, p.109).

Yet, nationally the well-being of early years practitioners is at an all-time low, with 57% of participants surveyed by The Early Years Alliance in 2018 admitting to having suffered from work-related anxiety. Within the last year there has been a reported 84% decrease in students enrolling on the Early Years Initial Teacher Training course and a large amount of qualified early years teachers leaving the sector due to poor pay, progression and conditions.

Surely our emotional welfare is a major contributing factor to child development? Theories relating to facilitative pedagogy seem to presume the practitioner is emotionally robust. For example, Elfer et al (2011) suggests the early years worker in their role as ‘key person’ should be intrinsically connected to the child and their carers. They should be emotionally available and a significant person for the family during their time at nursery. Similar to when air stewards encourage us to ‘first put on our own life-jackets’ in an emergency, ‘to really help the children we are working with, we need to first stop and look at ourselves and think about how we are, how good our well-being is’ (Mainstone-Cotton 2017, p.10).

More than ever, it is important for leaders in the early years sector to discover ways in which team cohesion and well-being can be supported and sustained to nurture the retention, skills and well-being of their existing work-force. Each setting and team is unique, bringing with it an individual set of idiosyncrasies and requirements. Therefore, support models cannot effectively be ‘one size fits all’ and I would suggest settings should either develop or adapt a system which best suits their needs.

So, where do we start? Most good practice happens when informed by theory, and from then onwards it becomes cyclical. In this instance, it would be helpful to look at the theoretical frameworks for practitioner well-being and models of support.

When looking for a definition of well-being, my favourite was from the New Zealand Curriculum. Under the strand of Health and Physical Education, well-being is considered holistically and known as Hauora (a Māori philosophy of health). ‘The concept of well-being encompasses the physical, mental and emotional, social, and spiritual dimensions of health’ (Ministry of Education 1999).

Societal (if not political) understanding and support regarding mental health issues has increased significantly over recent years. But, while there is evidence of robust research on the emotional and physical stress teachers working in primary and secondary schools are facing, insufficient consideration has been given to the experience of early years workers – despite local and national pressure on practitioners being higher than it has ever been.

Early years workers are particularly susceptible to stress-related illness, yet they report high job satisfaction. What is causing this contradictory evidence? ‘Many people who work with children do so from a sense of vocation’ (Clifford-Poston 2002); a feeling of deep-rooted affinity. A significant number of ECEC practitioners cite love as a ‘key professional quality’ (Taggart 2011, p.89). 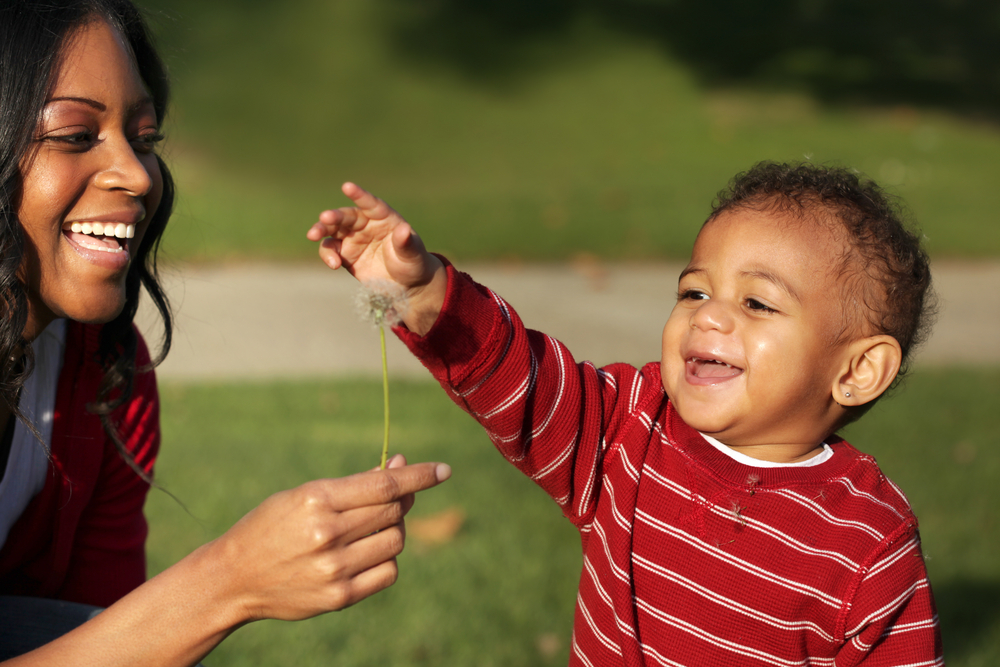 spection, I would suggest it is not the job itself which is the cause of high anxiety levels, but uncontrollable outside influences; the ecological systems Bronfenbrenner (2009) describes as the exosystem and macrosystem.

Hochschild (2010) goes so far as to describe our work as ‘emotional labour.’

Overall, work with children is underpaid and undervalued. A lack of resources and sometimes poor working conditions are daily reminders to practitioners that their skills go unrecognised (Clifford-Poston 2002).

Bertram (1996) discussed the importance of the facilitator’s professional well-being and sense of belonging. He believes that strong self-awareness and knowledge of one’s professional persona assists with the adult’s engagement levels, which is comparable to the child’s well-being and involvement (Laevers 2012). An engaged adult is a ‘systematic and rigorous observer, constantly seeking to improve the environment she provides for children’s learning’ (Bertram 1996, p.155).

So, Bertram is suggesting that adult engagement is as beneficial to the adult as it is to the child. ‘When adults display engaging qualities, they tend to have an improved sense of professional well-being and professional self-image’ (Bertram 1996, p.155).

Bettner and Lew (1990) claim there are four basic cornerstones (or dispositions) to well-being. We need to feel that we connect with others, that we are capable, that our opinions and actions count, giving us the courage to face new challenges. Considering the ‘Crucial C’s’ is a ‘quick and effective way to help participants to move from blaming to understanding themselves and others, so they might better meet their own and others’ needs’ (John 2008, p.62).

There are three possible models of support which can be used within this context: supervision, mentoring and coaching. 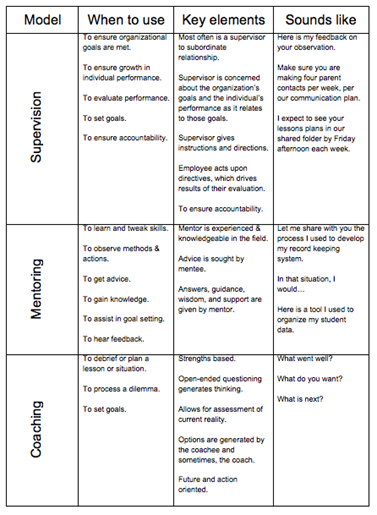 Supervision has ‘medieval and Latin origins’ (Sullivan and Glanz 2013, p.8) and was originally used as a ‘process of scanning for errors or deviations’ (Smyth 1991, p.30) when overseeing inexperienced school teachers.

Today, supervision used in its broadest sense is usually carried out between an employer and employee, where the skills of the supervisee are aligned to accomplish the goals of the company. Leaving the ‘autocratic past’ (Sullivan and Glanz 2013, p.14) behind, the supervisor role democratically nurtures the well-being and the development of the supervisee, regarding them as ‘a fellow worker rather than a mere cog in a big machine’ (Newlon 1923).

In a ‘helping’ or ‘caring’ profession, clinical supervision is an important part of containing the container; supporting the person who offers care and support to others, forming a triangle of care or ‘therapeutic triad’ (Hawkins and Shohet 2012, p.4).

‘Mentor’ was a character in Greek mythology, a respected and wise elder who guides Telemachus along a perilous journey. Today’s definition of a mentor is a hierarchical, dyadic relationship. A mentor is someone who ‘imparts wisdom to and shares knowledge with a less experienced colleague’ (Patti and Kibbe 2018, p.10).

Mentoring can be theoretically linked to Vygotsky, who believes successful learning happens when we are encouraged by a ‘more knowledgeable other.’ With such guidance, we can perform beyond our ability – within certain limits. He defined these limits as the zone of proximal development.

It is widely agreed that the term ‘coach’ originated in the 1830s where it was used at Oxford University as a slang for a tutor who ‘carried a student through an exam’ (Cox et al. 2014, p.2). Coaching continued to be used in the sporting sector until finding itself in the workplace at the beginning of the twentieth century. In its current form, coaching is a relatively new phenomenon which celebrates the individual’s skills and attempts to unlock the potential to maximise performance. It is helping to learn rather than teaching.

Grounded theory for coaching is in complete contrast to empiricist viewpoints that we are all born empty vessels, waiting to be filled with knowledge. Whitmore (2009) offers the analogy that we are acorns, all born with the capacity to grow into great oak trees. ‘We need nourishment, encouragement and the light to reach toward, but the oaktreeness is alread 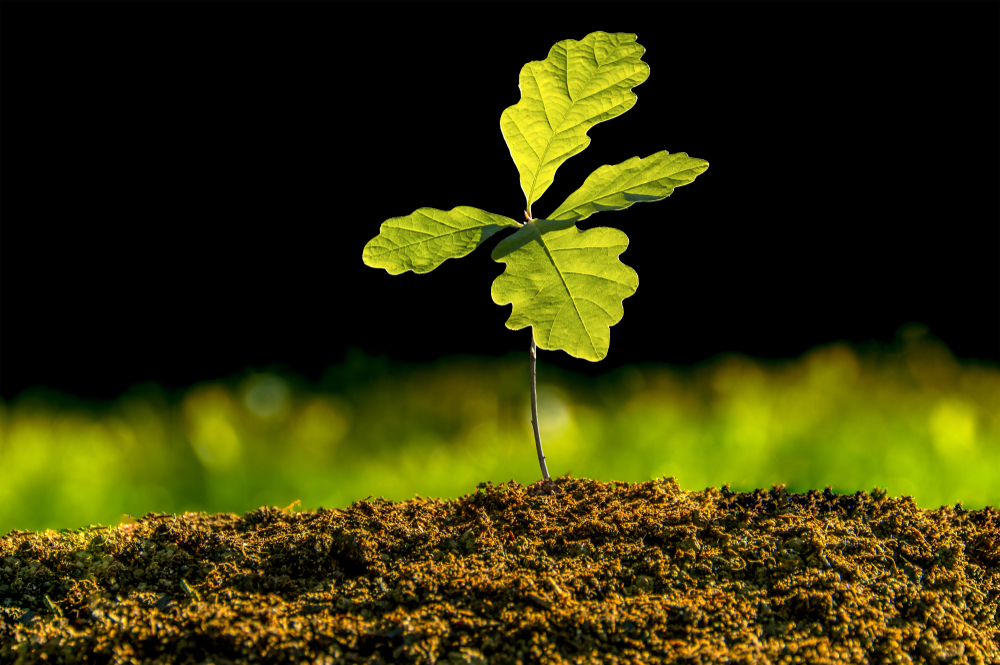 I don’t know about you, but I was sold on ‘oaktreeness’ and so were my colleagues! So we developed our support framework from a coaching model. How this worked in practice will be explored in my article entitled ‘Practitioner Well–Being: In Practice’.

There is a level of agreement amongst several academics and coaching practitioners that the following three theories are particularly relevant and underpin most coaching interventions.

Andragogy, the theory of adult learning introduced by Knowles in the 1970s, focusses on the premise that adults need to know what they will be learning. They prefer to be self-directed and treated as equals. Knowles believes adults continue their drive to learn throughout most of their lives. They learn best when there is a specific issue or problem to address and are internally motivated to problem solve.

The transformative learning theory of Mezirow (1994) involves a deep, fundamental revision of our beliefs, principles and feelings and implies a shift of perception that has the potential to alter our understanding of ourselves and others. Transformative learning requires the person to go through a series of stages, resulting in experiential learning. These stages begin in the comfort zone of being in equilibrium to being moved into a state of disorientation through being challenged about their thinking. Then, assisted through the skilful use of facilitative questions (from a coach in this case) to a state of reorientation and finally back to a new (but modified) state of equilibrium.

What is your goal for the session?

What is the current reality (in respect of the identified goal)?

What options are available to help you reach your goal?

What are you actually going to do in order to reach your identified goal?

I felt the GROW model lacked the ability for us, as a team, to look beyond the individual and take in the perspectives of others; in our case – colleagues, children and parents. On further research, I discovered the GROUP model (Brown and Grant 2010). This model (Goal, Reality, Options, Understanding others, Perform) follows the same initial phases as the GROW model but is used within a group or a team. The variation comes in the ‘Understanding others’ phase. This phase enables a team to ‘reach a higher level of consciousness and creativity through the gradual creation of a shared set of meanings and a ‘‘common’’ thinking process (Scharmer 2016, p.42).

I also recognised common threads running through the theory behind team coaching and the Crucial C’s of well-being. Team coaching gives a person the opportunity to work towards a shared vision from within a connected team. Their feeling of being capable would be fostered through the model’s style of open-ended questioning, leading to autonomous ideas and suggestions. The coachee’s opinions will feed into the action plan and ways forward, enabling all members of the team to feel they have a voice and they count. The overall experience of team coaching should promote a ‘can do’ attitude and the courage to learn from experiences. Wendell-Holmes famously states (in Adair 2007, p.85 ): ‘Many ideas grow better when transplanted into another mind than the one where they sprang up.’

To conclude this exploration of the theory of well-being in the early years setting, here are some quotes on happiness and how we might achieve it.  When Thomas Jefferson wrote about happiness in The United States Declaration of Independence (1776) he saw it as a basic human need:

‘The pursuit of happiness was not trivial pleasure seeking. It was fundamental to the condition of people’s lives and to their efforts to change and improve them’.

In contrast, Csikszentmihalyi (2002, p.2) states ‘happiness cannot be pursued; it must ensue,’ it is not something that just occurs by chance, it needs to be ‘cultivated’.

Rosenberg (2010, p.10) believes we have a fundamental drive to be happy which motivates our choices and decisions. The pursuit and cultivation of happiness is strengthened by reflective practice. ‘Increased happiness enhances a leader’s ability to transform self, groups and organizations.’

Click on the link to read Emma's companion article, Practitioner Well-Being: In Practice.

Emma Cook, MA, is an early years educator at One World Nursery in Brighton