Followers 0
Beatrice Merrick's Keynote speech for TEC 2: A sector response to changes to the EYFS

by Jack Dabell in Articles Professional Learning Toolkit on December 17, 2019

We were so pleased to welcome Beatrice Merrick, Chief Executive of Early Education, to deliver one of the Keynote speeches at the second Tapestry Education Conference. She spoke about the proposed changes to the EYFS and the sector r 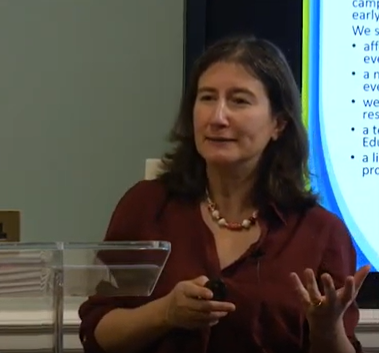 In this article, I’m going to be summarising and discussing Beatrice’s key points from her talk. If you would like to watch the talk itself, there will be a link at the bottom of the page.

Firstly, Beatrice began with a brief description of Early Education - a community of early years professionals that provide CPD, training, events, resources etc to other like-minded individuals. If you’re not familiar with them, do visit their website.

In the light of changes to the EYFS, Early Education formed a coalition with several other organisations and charities to try and give the sector a “joined up voice”. They wanted to ensure people with real and tangible roots in early years were being heard and considered as these changes were being devised. Because, as Beatrice put it “This is a bunch of people sitting in Westminster most of whom have very little direct experience of teaching.”

Imagine if, someday, we decided to radically change how plumbing works in this country. The guidelines, the rules, the protocols. And after we’d all decided on this big upheaval and change (for something that isn’t broken in the first place) – what do we do? We ask a group of zookeepers how they think plumbing should work. Don’t get me wrong, I’m sure some of these zookeepers know about plumbing. One of them might have been a plumber before they became a zookeeper. But do they know more about plumbing than all the current plumbers? Probably not.

You get the point.

So, irrespective of how many plumbers were involved, the new ELGs were piloted. The results of the pilot were published in Autumn this year but there is one obvious flaw: representation. 24 schools (70-ish teachers) piloted the new ELGs. Considering the thousands of early years professionals who will eventually be using them, this is not exactly a representative sample size.

Nevertheless, according the EEF’s report the revisions were viewed “positively overall”. Practitioners thought they were clearer and were reporting a decrease in workload. However, most agreed the ELGs on their own weren’t enough and they needed exemplification and non-statutory curriculum guidance. This comes with a big caveat: non statutory guidance doesn’t require any consultation. It could just come out. In any state. And if the pilot practitioners are already saying they need this guidance to make it work, we had better hope this guidance has been consulted on six ways from Sunday.

So why do we seem to be off to a bad start? Sample sizes and plumber involvement aside, has the DfE’s approach been the right one? Beatrice said the approach was “top down driven” and “slightly backwards”. What they should have been thinking was, “Have we got the right curriculum and then, how do we assess it?”

Many of the people responsible for wording the new ELGs and other such revisions are “quite eminent researchers” but they have a tendency to be more concerned with psychological assessment and wording questions in precise ways to ensure greater standardisation. But that’s not what the Early Learning Goals are for. “They’re not psychological test instruments. They are something that has to be in keeping with the EYFS principals of assessment.”

Beatrice explained that the coalition of early years organisations had a number of key aims they wanted to achieve: to be the voice of the sector, to ensure any changes being made are based on evidence and engagement with practitioners, to raise awareness about the draft, and to commission a research review.

They’ve made a lot of progress. Their voice is being heard as they now have representation on the advisory panel. The research review is done and is packed with valuable information. You can find a copy of it in the link above. They do have a joined-up voice with other professionals who are all working together with the best interests of the EYFS at heart.

But what, in Beatrice Merrick’s opinion, are the key issues with the changes happening in the EYFS at present?

The following is drawn from the review that Early Education funded, and from a large-scale practitioner questionnaire.

It comes back to that old adage – “If it ain’t broke, don’t fix it.” Beatrice said: “You could say, this is a piece of work that does not need to be done.”

Beatrice explained that the evidence backed up the general consensus that the Prime Areas of Learning are the most important things that need to be right. And that idea hasn’t changed significantly since the Tickell Review in 2011.

C&L underwent some interesting changes. Initially, 'Attention' was scrapped, and they moved 'Understanding' over to Literacy. Taking these two key aspects out brought about complaints and criticism and so the solution was having one called 'Listening, attention and understanding.' Along with 'Speaking' as the second under the C&L area.

Beatrice recognised that importance is being placed on this area, but what they’re doing doesn’t seem to reflect this: taking Communication and Language down to 2 and Literacy to 3. In response to this they said they are “threading” a lot to do with C&L into other areas. Beatrice argued that this just adds to the confusion. Yes, it should be a holistic, interconnected curriculum in practice, but each area needs to be clearly defined to avoid confusion and ambiguity.

Beatrice praised the added emphasis on number and more focus on 0 – 12 instead of 0 – 20. However, what they have lost sight of is situating maths learning in a concrete context – this is particularly emphasised by the controversial decision to remove 'Shape, Space and Measure'. Speaking of which, the evidence really backs up the importance of teaching young children spatial thinking. It permeates maths, science and technology to name only a few. Beatrice said removing a skill that is only becoming more relevant given the world we live in seems “bizarre”.

Here we are, in an increasingly digital age and yet 'Technology' has been removed and replaced with 'The Natural World'. Beatrice admits it was a problematic statement to begin with – it needed to change – but taking it out entirely seems like a “cop-out”.

Early Education’s research also suggests that citizenship and children’s rights should feature heavily under this area, and yet there’s not really any mention of it. This is particularly concerning considering the UK have just dropped from 11th to 156th in global children’s rights rankings.

Self-regulation is already entwined in the Characteristics of Effective Learning in a way that recognises the depth and complexities of this term. However, in the new ELGs it goes solo, and appears to be used as a catch-all statement in a way that is “confused and confusing”.

“Teacher workload isn’t driven by the way the goals are written at the moment,” Beatrice said. Workload comes from leaders and managers and from the misunderstanding of Ofsted requirements. None of which necessitates a change to the ELGs.

This whole scale change is actually creating more workload for practitioners because they have to re-learn and re-design things they already have in place.

So, what do practitioners want?

“What we need are more resources for the sector, not more changes to the paperwork.”

You can watch Beatrice's talk in its entirety below.

Jack is part of the Product Support Team and the Education Team at Tapestry. He taught in Key Stage 2 for four years but now spends most of his time stroking his beard and thinking about how to make his articles funnier.
Followers 0